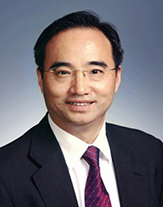 Dr. Huang Jin, born in December 1958, is Professor of International Law at China University of Political Science and Law, and Vice President of China Law Society, President of  Chinese Society of International Law and President of China Society of Private International Law. He used to serve as President of  China University of Political Science and Law, as an Invited Consultant of the Supreme People's Court, as one of the expert members of the International Commercial Expert Committee of the Supreme People's Court, as an expert consultant of the Supreme People's Procuratorate, as an arbitrator of the Permanent Court of Arbitration (PCA), as an arbitrator of the Court of Arbitration for Sport (CAS), as an arbitrator of the International Centre for Settlement of Investment Disputes (ICSID). Former Fulbright Scholar at Yale University Law School in US, Guest Professor at Saarland University in Germany, Visiting Scholar at the Swiss Institute of Comparative Law, an attendee at The Hague Academy of International Law in the Netherlands. He has ever presided over and participated in many scientific research projects both in China and abroad, and published more than 60 monographs, editors or co-editors such as A Study on the State and the Immunity of Properties, A Study of Inter-regional Conflicts Law, Private International Law and Arbitration Law. He was awarded the title of "National Top Ten Outstanding Young Jurists" by China Law Society, "Top Ten Outstanding Young People of Hubei Province", First Prize of Bao Steel Education Award, First Prize for National Teaching Achievements in Higher Education by the Ministry of Education, First Prize for National Teaching Textbook and Scientific Research in Law by the Ministry of Justice, and an Honorary Doctorate from the University of Montréal in Canada.